Welcome to the Savannah cat!

This breed brings wildness and beauty of Africa into your life along with just the most adorable dog like temperament. I have been a Bengal breeder for 20 years and they have always been my first love. However I'm totally smitten by the Savannah character, very interactive, playful, outgoing and curious. They have a beauty all of their own.

What is a Savannah Cat?

The Savannah Cat is a Hybrid offspring of the African Serval.

When a Serval Cat mates with any ordinary domestic cat, they can produce hybrid Savannah kittens.  That mating is generally called F1 Savannahs in the cat world.

F1 Savannah hybrid cats are very similar to Servals.  They will generally inherit the large Serval ears, slightly smaller in size with a beautifully spotted coat.

We no longer produce F1 kittens as we no longer own a working serval. We lost our precious Kimondo a couple of months ago. We will never forget him, or the honour of owning him. He was a perfect gent, he even ate his food on a plate. If he had a girlfriend he liked, he would chirrups and tell us all about it. If she was not his type he would NOT get out of bed. He was never aggressive, he was the perfect boy. RIP Kim.

To own an F1 Savannah Kitten in the UK a Dangerous Wild Animal Licence is required.  F2 Savannah kittens (Grand father is a Serval and mother is an F1 Savannah Female) are classed as general domestic cats in the UK with loving dog like temperaments.

Savannahs Cats are considered by some to be one of the larger breeds of domesticated cats. The savannah's tall and slim build gives the appearance of greater size than their actual weight.

Size is very dependent on F1 hybrid and F2 hybrids are usually the largest, due to the stronger genetic influence of the African Serval ancestor. Male Savannah Cats tend to be larger than females Savannah cats.

Because of the random factors in Savannah hybrid genetics, there can be significant variation in the size of a Savannah Cat, even in one litter.   F1 hybrid male Savannah cats usually being the largest.

The coat of a Savannah depends a lot on the breed of cat used for the domestic cross.

Early generations have some form of dark spotting on a lighter coat, and many breeders employ "wild" looking spotted breeds such as the Bengal and Egyptian Mau for the cross to help preserve these markings in later generations.

The overall look of an individual Savannah Cat greatly depends on its generation, with higher-percentage Savannah cats often having a more "wild" look.  The domestic breed that is used will influence appearance as well.

The domestic out-crosses for the Savannah breed that are permissible in TICA are the Egyptian Mau, the Ocicat, the Oriental Shorthair, and the Domestic Shorthair.

In addition, some Savannah breeders have in the past used "non-permissible" breeds or mixes such as Bengal (for size and vivid spotting) and Maine Coon cats (for size) for the domestic parentage.  A Savannah's wild look is often due to the presence of many distinguishing Serval characteristics.

Most prominent of these include the various colour markings and tall, erect ears. The bodies of Savannahs are long and leggy - when a Savannah is standing, their hind-end is often higher than their shoulders.

The head is taller than wide, and they have a long slender neck. The backs of the ears have ocelli, a central light band bordered by black, dark grey or brown, giving an eye-like effect.

The short tail has black rings, with a solid black tip. The eyes are blue as a kitten (as in other cats), and may be green, brown, gold or a blended shade as an adult.

The eyes have a "boomerang" shape, with a slightly hooded brow to protect them from harsh sunlight. Black or dark "tear-streak" or "cheetah tear" markings run from the corner of the eyes down the sides of the nose to the whiskers, much like that of a cheetah.

These tear marks also help reduce glare from sunlight, which aids the Savannah's vision during hunting.

Most F1 generation Savannahs will possess many or all of these traits, while their presence often diminishes in later generations. The hybridised-breed of cat's appearance can vary far more than cat owners may be used to".

Pictured below is Amazing Grace, our  F1 female pictured at just 3 months old. 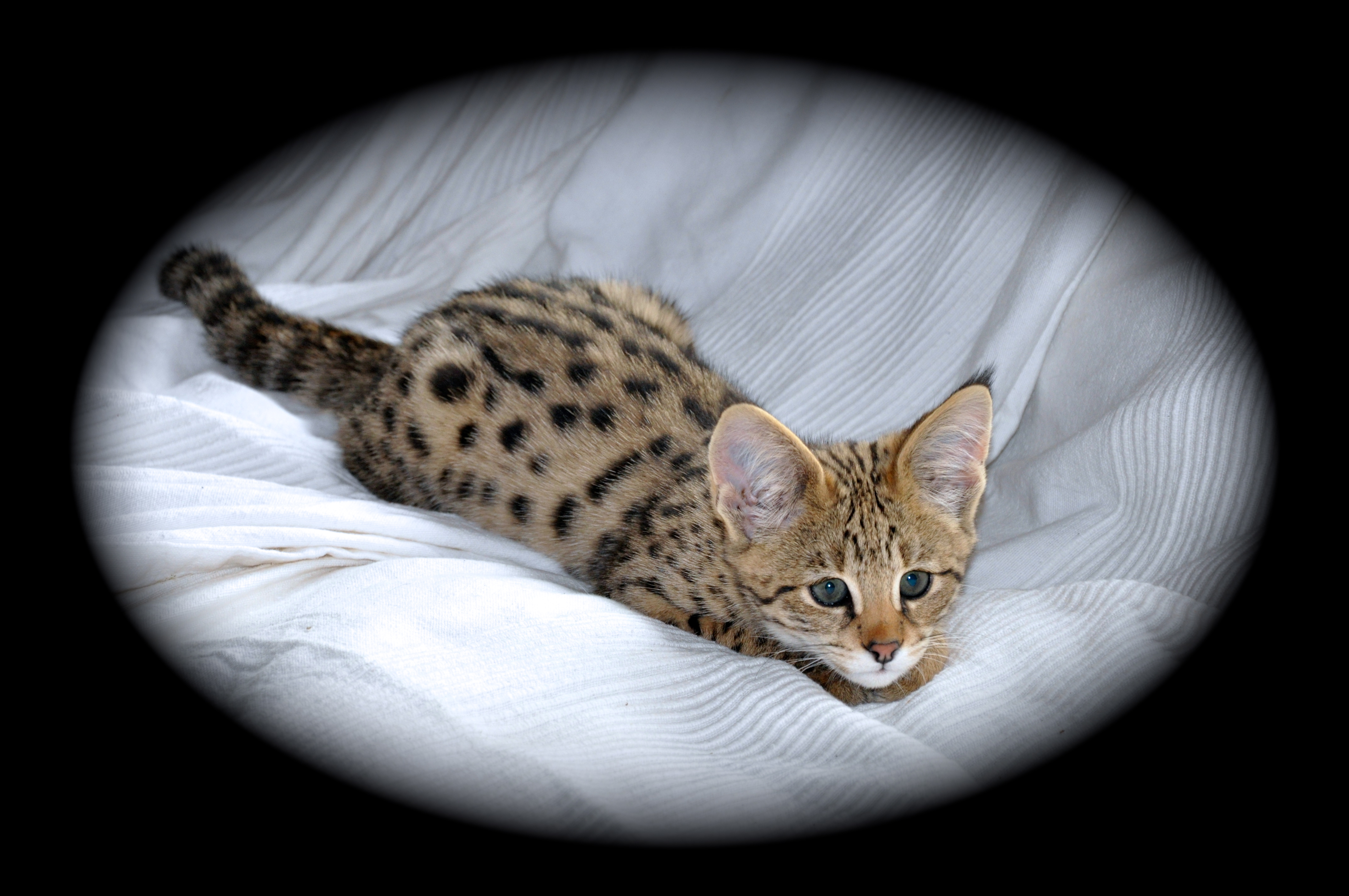 How big can a Savannah Cat get?

It is important to remember that each Savannah Cat is different - what it lacks in size or coat colouring, if it is a truly bred savannah to savannah cat it will certainly make up for that in its dog like personality.